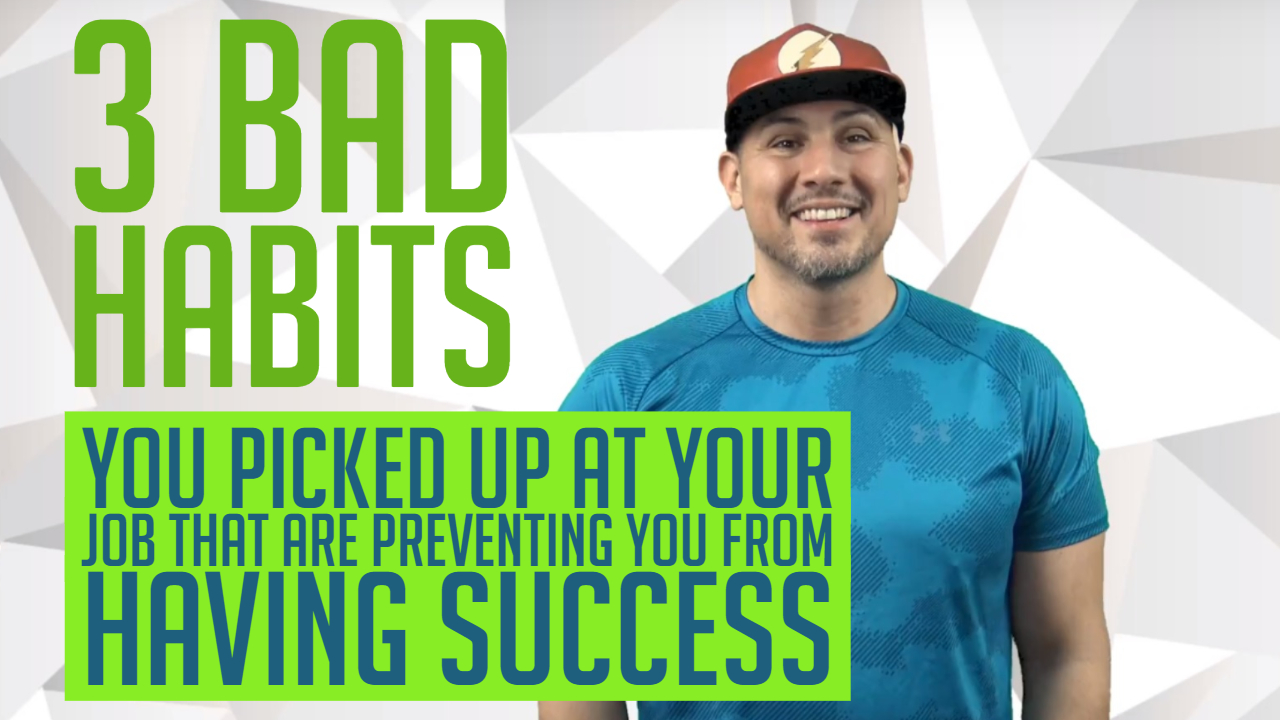 Today I’m going to cover with you the top three bad habits that you picked up at your 9:00 to 5:00 (job) that is holding you back and preventing you from having success. Before we get started, 🔥 Click HERE 🔥 to join our PRIVATE Facebook for Real Estate Agent HACKS so hot that we can’t make public : https://talktopaul.com/fbgroup and make sure to subscribe to my YouTube Channel for access to all the content that I am creating and curating for you.


Here’s the deal. The first bad habit that you picked up is this entrepreneur pornography that you’re going to be able to start at 9:00 and end at 5:00. It’s not going to happen especially when you’re building your own dream, especially when you’re allocating less hours to building that empire, that business, then you are working at your 9:00 to 5:00. Look, I’m not suggesting that you put yourself in financial duress and you leave your 9:00-to-5:00 because that’s what’s paying the bills right now, but what I am suggesting is that you don’t allow that comfortability of that regular paycheck to prevent you from investing the hours required in order to build the business to the level, to the degree that you want it to get built at.

Number one. The first bad habit that you picked up is thinking that this is 9:00 to 5:00, thinking that this is a set number of hours, which is not true. There will be days where you will put in 10, 12, 16 hour days. There will be weeks where you will work seven, eight days straight. I know that’s not possible, but you get my point. My point is is that you have to get that out of your head. There is no 9:00-to-5:00 when you’re building a business. Your hours are whatever it takes.

I am open to whatever it takes. Those are your hours, and initially when you’re building it you better get used to that, and if you don’t like it then then don’t start. It’s not worth it. It’s not worth it for you to think that you’re going to be able to compete at the level that other people want to compete at when you’re just going to be contributing part time hours, part time commitment, part time effort, when you’ve got other people that are willing to put in more hours than you. So, all I’m saying is get that idea that you have a fixed number of hours for your endeavor, for your entrepreneurial mission, whatever it might be. Get that out of your head. It will exceed that. It will vastly exceed that more than you anticipate.

Allowing your titles to define you. Here’s the problem with your current job. You’ve been assigned a title. You work based on that title. The work that you do revolves around that title, and for most people including myself who ever had a job, I know very few people that have never had a job, but for most of us I would venture to say 98% of the population who have had jobs we typically assume the title that is given to us, and then we do the acts that are required to maintain that title or we’ll do the work and we might do a little bit more so that we can achieve the next level. The next higher title, but my point is is that nine times out of ten the average employee will work to the degree of their title.

As an entrepreneur it doesn’t work that way. As an entrepreneur your title is CEO and janitor. Your title is everything. Your title is social media expert, advertising expert, marketing expert. You will have to get used to doing everything or at least having a little bit of an idea about how to do everything when you’re just getting started, “but Paul shouldn’t I have the ability to delegate? Shouldn’t I be hiring people that are experts in their field so that they can do what they’re good at and I can do what I’m good at?” I mean that’s going to be the argument.

The argument is going to be that you want to delegate and hire the right people for the right titles, and yes you are right, when you get to that level to where you can afford to pay that talent to be able to do what it is that you need to do. Now, look if you have money set aside to build your business and you’re not worried about that that is fine, but for the people that are just getting started, that are just building their business, that are using their nest egg, that are refinancing their homes, that are pulling out 401ks, that are doing whatever they need to do to get that business off the ground, then the reality is they’re not going to be able to pay a premium for top-notch talent to get it going, and so the top-notch talent comes from within, and so what I’m trying to say is that title that most of us get at our 9:00-to-5:00, or at our job, or whatever your work hours might be that title that we have at that job does not exist when you are starting your own business.

Your title is everything. Your title is I’ll handle it all. I’m Mr. or Mrs. I’ll handle it all. That’s your title. So, you have to get out of this idea that you have a specific role when you’re starting your own business and you don’t have to go beyond or outside that role. You will have to go beyond and outside of that role more times than you possibly think.

The third and final bad habit that you picked up at your 9:00 to 5:00 is you working harder to build someone else’s dream then you’ll ever work for yourself. Now, here’s what I mean by this. I am in the real estate profession. Yes, I’m an entrepreneur, but as a real estate practitioner we are all independent contractors and I can tell you from personal experience that I have seen people go to jobs deathly ill, sick, tired, hungover even from partying the night before, still going into work, not missing a day’s work. Why, because the don’t want to do something to jeopardize their paycheck. They don’t want to put themselves in that position, but God forbid you have the sniffles, and you don’t feel good, or you’re tired, or you’re a little uncomfortable, or you’re cranky, and you come into the office at least within my organization. I’ll just use myself as the example and say you know what I’m not feeling so good today. I think I’m just gonna go home and rest. It’s easier to quit on yourself than it is to go and quit on somebody else especially at a 9:00-to-5:00.

That’s a horrible habit that many people have picked up. They will work harder for somebody else. They will deal with stress. They will deal with poor health, and some cases they’ll even deal with harassment. They will put up with all those things but the minute that they hit their first degree of uncomfortability in their own endeavor and chasing their dream. The minute they hit that first speed bump they head for the hills. That’s a horrible habit to pick up, and I’ll tell you that most people have picked that up at a 9:00 to 5:00 and that has killed more brilliant entrepreneurs than anything else.

Now, for those of you that are watching this some of you are gonna be like, “Well, wait a minute Paul. So, what you’re telling me than is your own employees should not work as hard for you as they should work for themselves or for pursuing their own dreams? Is that what you’re telling me? And yeah that’s exactly what I’m telling you. Not everyone is going to want to become an entrepreneur, and that’s fine. Some people are comfortable with their position, with their titles, with their set hours, and with their set pay, and that makes them happy and they couldn’t ask for more. For those people, congratulations! I’m glad that you’re content. I don’t look down on that. I don’t frown on that. This message is for the people that claim, entrepreneur’s that claim that they want to build their own business but then don’t want to do what they need to do in order to build their business.

See, I can tell and I can spot a broken entrepreneur the minute they start the conversation like this, “well, I tried that.” I tried. I tried. I’m not saying that I want my employees to not work hard for me to not give me that 110 percent, but what I am saying is that if they have a dream if they have a calling in their heart and that’s something that they want to pursue, then you know what man then by all means I better see you. If you’re not working hard to fulfill your dream, and you’re working for me, or you’re a part of my organization and I’m not inspiring you to do that then I didn’t do my job. That’s just the reality of it.

The older I get the more I realize that the only difference between those who succeed and those that don’t is simply the fact that those that succeeded didn’t quit. Now, that doesn’t mean that the route that they were taking, during that route they weren’t hitting stumbling blocks, and they weren’t screwing up, and they weren’t messing up, and things weren’t going their way. Absolutely, what started out as a dream this way will eventually shift and morph into a different type of dream, and that dream will eventually change. It always does.

I mean if you take a look at some of the organizations that got started or massive success stories when they were just getting started  that is just a shadow of what they eventually became. You look at Netflix. Originally all they were doing was mailing out DVDs now look at what they’ve become. You take a look at Amazon. Amazon started with only books. My point is is that that dream will change. Don’t worry about what it eventually becomes. Worry about putting in the effort, worry about working harder to achieve your dreams versus achieving the dreams of someone else. Yeah, can we agree on that?

I’m gonna get off my soapbox now. I appreciate you reading this blog. I hope that in some small way it inspired you, that it sparked an ember. I hope that it lit a fire in your belly to go out there and accomplish the things that you want to accomplish. Is it gonna be easy? No. There will be some challenges, and along the way you will discover that you are much stronger than you thought you were capable of and you’re gonna learn how to handle those problems, and you’re gonna learn how to overcome those hurdles. I guarantee it. Now, if there’s any insight that you might have or any comments that you think that I should have added to this blog or any comments that you think I should address in future blogs please comment below. I look forward to hearing from you. I look forward to hearing about your success. I’ll see everybody soon.