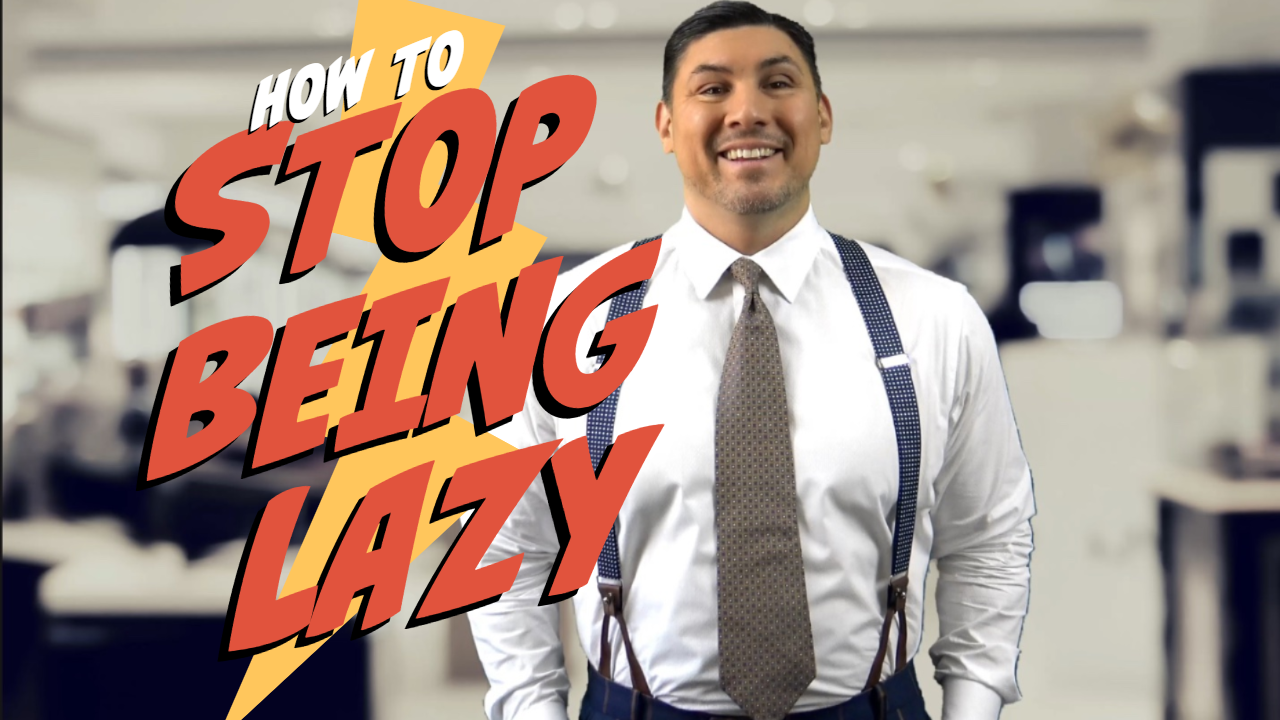 3 Tips That Will Make You Stop Being Lazy

I’m gonna give you three tips today on how to stop being lazy. Now, if you have any ideas for content that you think we should cover or any questions that you would like for us to address by all means make sure that you comment below or send us an email directly or reach out to us in the community tab of our channel, and I’ll make sure that we start working on some of those ideas or questions or comments or concerns that you might have. Let’s talk about being lazy. Look, I believe that we are all inherently lazy. In fact, I’m gonna take it a step further. I believe that somewhere embedded in our DNA, in our 46 chromosomes, is a code for laziness. It’s embedded in us. Now, have you ever seen the beginning of X-men where they show the DNA strands and the coding, or Spider-man the early ones with Tobey Maguire where they’re showing the DNA splicing? Somewhere in that code is a lazy gene. I am convinced of this.

Now, some of us have learned how to overcome wanting to be lazy, but the minute they figure out how to get that DNA out of us we’re gonna be a society of nothing but hard-working individuals with amazing work ethic. I’m exaggerating a little bit, but I think you get the point. We all have that tendency to want to be lazy. It’s okay. It’s normal, but again there are those of us who have figured out how to overcome that urge of wanting to be lazy.

I’m gonna dive into my personal life a little bit. Now, growing up I always had tremendous work ethic. I wasn’t the smartest. I wasn’t the most talented. I wasn’t the best-looking, but I’ll tell you what. I worked my a** off, and I knew that the minute the more talented person started to suffer a little bit of fatigue that was when I was going to pass them by, because I knew that I could outwork them. That was the one gift that I got from God that he gave me that made me excel, was my ability to hold on or to tread water. I could do that. With that being said, as a father of five with my wife I expected based on my own personal experience that because I operated that way that my children would operate the exact same way. I was wrong.

So, what happened was I would get on him, asking him, why aren’t you researching joining leagues? Why aren’t you going and joining travel teams? Why aren’t you watching videos and drills on how to get better at your sport? I would get on him and I’d get on him and I’d get on him, and you know what none of that worked. It’s not like he started doing those things. In fact, all it did was it created a little bit of a rift between me and my son because I was on him so much, and here’s the deal. I eventually learned that he wasn’t doing anything outside of the ordinary. That just wasn’t his personality. That wasn’t who he necessarily was. That doesn’t mean it was a good thing or a bad thing, but here’s what this experience taught me.

My daughter Bryannah is a gymnast, and at a young age she would try everything she wanted to do. Ballet. She wanted to do acting. She wanted to do singing. She wanted to do gymnastics, and every three or four months she’d be switching from one thing to the other, and I remember her saying to us, and there’s a video that we found of her when she was about seven or eight years old and she’s on the jungle gym saying, “I want to be a gymnast. I’m gonna be a gymnast dad. I’m gonna be a gymnast,” and she’s talking about all this and I didn’t enroll her in any type of gymnastics academy or any type of gymnastics coaching or personal training because I felt that she was involved in so many other different things. I thought this was just another one of her ideas, and here’s the deal.

I fast forward to now. She’s twelve years old. She’s about a level four/level five gymnast. She is now practicing with girls who are younger than her age because she has the goal of making the Olympics, and when we look back at that video of her where she’s saying she wants to do gymnastics I realized that I probably should have enrolled her. Why am I sharing this?

Here’s the difference between the two scenarios. Bryannah was the type of child that did have that work ethic, and she was researching, and she was watching videos. She is watching videos, and she is watching tape, and she is reading the books, and she is consuming as much information about gymnastics as she can. Now, regretfully I feel had I put her in a little bit earlier she would be where she is supposed to be right now. Two different children raised by the same parents, same household, same work ethic, same everything, same work ethic at least demonstrated by the parents. Two completely different experiences.

The difference is with Paul and what I learned was that Paul will choose to be lazy if given the opportunity. If given the opportunity he will choose to be lazy every single time. He will choose to not go to practice if I don’t hold him accountable and send him to practice, and go there and physically drop him off, and get him over there and make sure that he understands. Here’s the deal. After months and months and months of doing this he now goes to his practices. He now goes to his games. He now knows; he still calls me every once in a while and tries to tell me, “Hey, I don’t really want to go to practice,” but he already knows what my response is going to be. My response is, “Paul you’re going to go anyway, and don’t ask me again. You’re gonna go anyway.”

Now, had I exhibited the same type of behavior with Sebastian his high school experience in my opinion would have been completely different, because I should have taken it upon myself as his parent to have said, “You know what he needs to go. Let me research the travel teams. Let me get him out there. Let me put him in that environment.  Let me constantly be pushing him and trying to get him to excel. Let me hold him accountable because right now he’s at an age where he can’t hold himself accountable and he will choose to be lazy over actually going out there and putting in the work. That doesn’t mean he’s a bad person. That just means that like most of us will choose the opportunity to be lazy over hard work.

Nobody likes the hard work. No one, but everybody loves the accolades. Everybody loves the reward, but nobody wants to put in the work. Now, look years later I can beat myself over the head about the experience. I can tell myself how much of a bad parent I was, but the truth is all it did was it just taught me the way that I should be operating. That I need to hold my children accountable. Not everyone is gonna be like Bry. Not everyone is gonna be like Me, and I’m not patting myself on the back. I’m not saying anything about myself. All I’m saying is I just had a different work ethic and I know that even if I had someone holding me accountable I could probably perform at an even better level, and we’re gonna talk about that a little bit.

What I discovered as a parent was that I have to hold my children accountable because if I gave them the opportunity to hold themselves accountable they would choose to be average. They would choose to be lazy. Not all of them. I’ve got that one Bry. We’ve got her that will hold herself accountable, but even she needs a coach to help her excel and go even higher. How does this apply to business and what are we going to talk about?

The very first thing that you need to do in order to not be lazy, go to sleep a little bit earlier. Here’s the deal. Go to sleep a little bit earlier. I know that it’s very tempting to go and watch Netflix at 10:30/11 o’clock at night and then try to wake up early and get it all done, but it’s difficult. You need your sleep. You do need time to recover. You do need that mental relaxation. Your brain needs to shut itself off, so go to bed earlier so that you can wake up earlier, so that you can be more refreshed, so that you can accomplish more during the next day. So, that’s number one. Number one, it’s very simple. Go to bed earlier. Wake up earlier.

Now, look this blog wasn’t intended to be very long. I just wanted to give you three real quick tips on how to stop being lazy and I invited you into a little bit of my personal life and some of the stuff that I’ve gone through as a parent that has impacted me not only at home, but it has impacted me in the office as well, and the way that I conduct my business. Make sure that you comment below if you have any experiences that you’d like to share. I learn a lot from other people and from the comments, and from what they feel comfortable sharing with me, so make sure that you comment below if there’s information that you’d like for us to talk about in our next blog. I look forward to hearing from you. I look forward to meeting you. Take care.