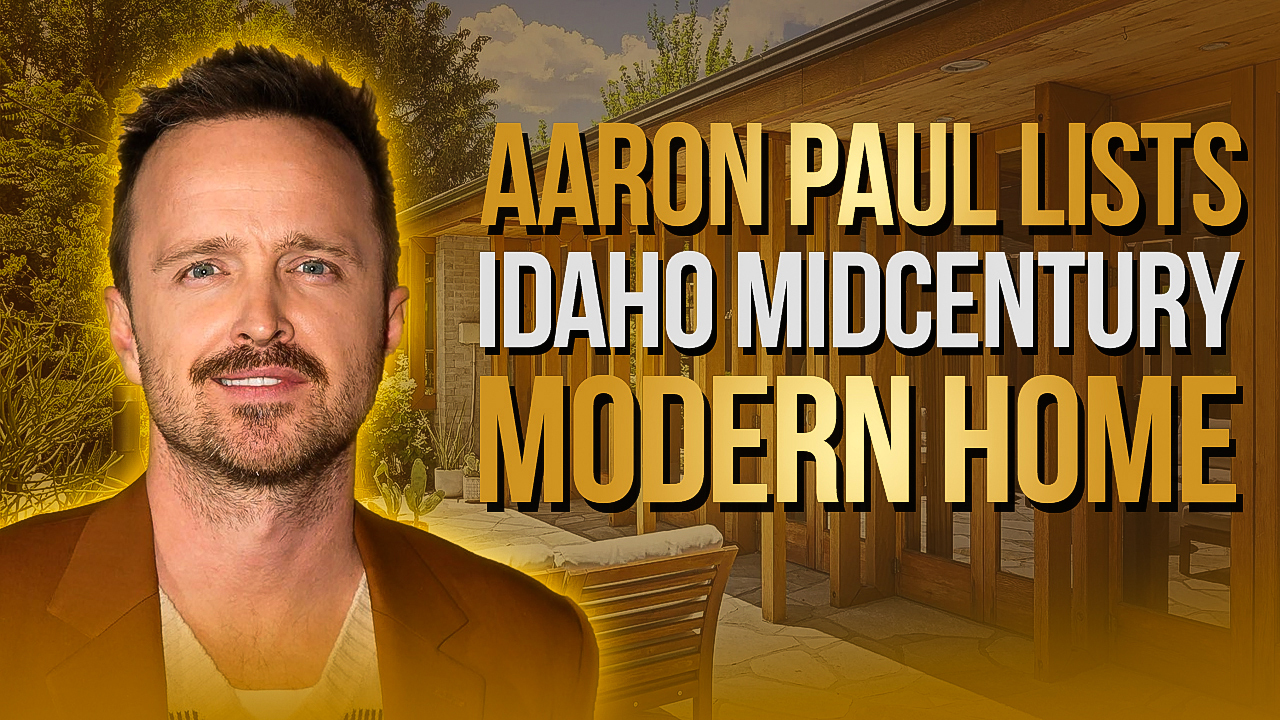 Hello, people. Welcome to the TTP Youtube channel. Actor Aaron Paul has proudly put his modern midcentury home in Boise, ID, on the market for $1,349,500.

Paul stated in his Instagram post that the residence was the first home he had ever lived in. The Emmy winner said while it pains him to part with his childhood home in Idaho, he’s fortunate that he was able to live there for so many years. If you want more celebrity real estate content, subscribe to the TTP Youtube channel and hit the notification bell. 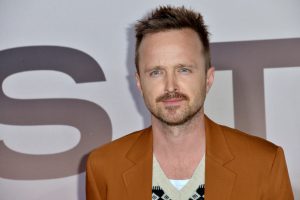 The Klein House is a mid century modern masterpiece designed by Art Troutner and located in Warm Springs Ave. The stunning Frank Lloyd Wright style home with natural materials, like honey-tinted woods, Oakley Stone, and an abundance of natural light creates a timeless palette that blends cool and warm elements. The home has an indoor geo-thermal/mineral swimming pool surrounded by open spaces perfect for relaxation and creativity. As the site of comfortable living spaces on a large lot with expansive grassy grounds, this historical property also has magical meaning for anyone with midcentury design interest.

The Frank Lloyd Wright-inspired home was built in 1959 and measures 2,171 square feet.

Besides the business’s ultimate minimalist design, which has won many awards, you can also appreciate their outdoor pool as more than just a convenient reward for your work schedule. The pool blends into the business because of its natural beauty and large scale.

The home was located on geothermal mineral water and includes indoor pools that utilize geothermal water to counter the dry, hot climate. 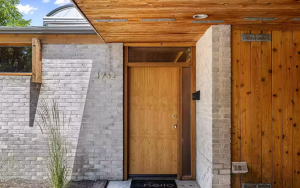 As you enter the house, it is the spectacular pool that is the focal point of the open floor plan. There are French windows and doors to ensure that natural light enters in every way possible.

One can always feel the creativity that went into the design of this amazing home. The layout was designed to ensure this.

“There are different views from every window where you can always see the evergreens and different trees, the sky, the pool, and the stunning architecture,” according to Lamb. “When the sun goes in and out of the clouds, the light just dances inside the house.”

The Klein House is locally known as a uniquely designed historical home with a variety of high-end finishes.

The house was originally designed for Edith Miller-Klein, who was the first woman in Idaho to pass the bar exam and later became an active member of the state legislature.

Henderson stated that many visitors to the building are not necessarily fans of midcentury design but remain awe-struck by the building. People who are interested in midcentury style leave with jaws dropped. Henderson added the property is stunning. 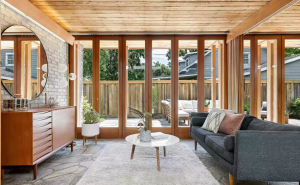 The Frank Lloyd Wright-inspired home was built in 1959 and measures 2,171 square feet.

Beyond the picture-perfect design and an impressive indoor swimming pool described as “very minimalistic” by the agent, the home is built high up to avoid street noise. The agent also said there’s a reason why the pool fits right in. 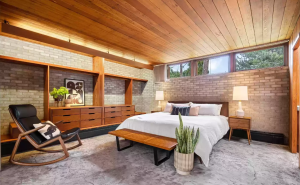 “The site for the home is very unique as it was located on geothermal mineral water, so the whole house is heated with geothermal water, including the indoor swimming pool,” said Lamb.

As you walk into the house, you are blown away by the cinematic scenery that takes your breath away. The open floor plan features 54 French windows and doors that slyly let in light from every angle.

The layout was designed by an architect to ensure “one can always see and feel the intended creativity that went into the design of this amazing home.”

According to Lamb, “There are different views from every window where you can always see the evergreens and different trees, the sky, the pool, and the stunning architecture. When the sun goes in and out of the clouds, the light just dances inside the house.” 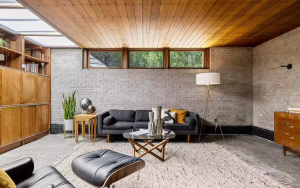 There are a number of high-end finishes in the Klein House, including honey-tinted woods and Oakley stone. Locally known as the Klein House, this unique and historically significant design has attracted art and architecture enthusiasts.

He said, “The house was originally designed for Edith Miller-Klein, who was the first woman in Idaho to pass the bar exam and later became an active member of the state Legislature.”

The Atomic Age house has been attracting a wide range of people, from those who enjoy elements like this architecture to those who have never heard of it before.

The creator of the landmark property was excited by its impact on those who do not care about mid century modern architecture. With such a breathtaking layout, many visitors leave with their jaws dropped.

Aaron Paul Sturtevant is an American actor, best known for his roles as “Jesse Pinkman” in AMC’s Breaking Bad. For which he won multiple awards, including critics’s choice television award for best supporting actor, Primetime Emmy Award for outstanding supporting actor in a drama series, Satellite award for Best Supporting Actor Series, Miniseries or Television Film and the Saturn Award for Best Supporting Actor on Television. He reprised the role of Jesse six years after the show ended in El Camino: A Breaking Bad Movie in 2019. This led to further critical acclaim and people are excited to see him on the final season of Better Call Saul next year. 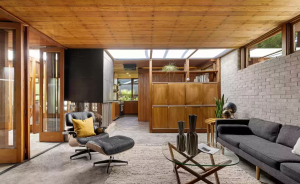 Aaron Paul Sturtevant was born in Emmett, Idaho on August 27, 1979. The youngest of four children born to Darla and Baptist minister Robert, he was born a month premature on his parents’ bathroom floor.  Aaron grew up participating in church plays, graduating from Centennial High School in Boise Idaho with his mother and $6,000 in savings. He arrived in Los Angeles after appearing on an episode of the game show “The Price Is Right”. Appearing under his real name he lost his pricing game and overbid on his showcase. In L.A., he also worked as a movie theater usher at Universal studios. 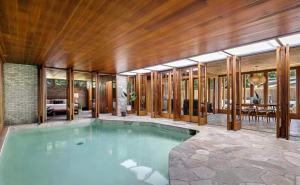 Following his role as Scott Quittman on HBO’s Big Love, Paul first starred as Jesse Pinkman on AMC’s Breaking Bad. The original plan for Jesse to die in the first season was changed after seeing how well Paul and lead actor Bryan Cranston had chemistry. He has been nominated four times for Outstanding Supporting Actor in a Drama Series since then: 2010, 2012, 2013, and 2014; he won in 2012.

Paul starred in the film Smashed which was one of the official selections for the 2012 Sundance Film Festival. Paul spoke about his childhood experience as a Boise State Broncos fan and discussed the challenges of portraying a meth addict in Breaking Bad. In 2012, he made appearances on the show, Tron: Uprising. He voiced a character named Cyrus. 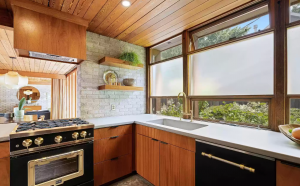 In September 2013, he was featured on Zen Freeman’s song, “Dance Bitch”. He made a surprise appearance on the 39th season opener of Saturday Night Live with Bobby Moynihan with his character, the “drunk uncle”. Pual also starred in Need for Speed as a street racer who gets revenge against his former boss. He also starred in Hellion opposite Juliette Lewis as the drunken father of two young vandals. In 2014, Paul starred in Exodus: Gods and Kings, portraying the Hebrew prophet Joshua.

In 2013, Netflix announced that Paul would be one of the voice actors on Season 1 of BoJack Horseman. He also appeared in a WWE match, where he helped Dolph Ziggler win. A few years later, Paul played a father who was being investigated after his son had an accident and died in the 9th Life of Louis Drax. 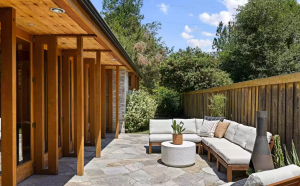 In 2016, Paul began playing Eddie Lane in Hulu’s The Path. In The Path, Eddie questions his faith after joining a cult. Paul voices the main protagonist, Nyx Ulric in Kingsglaive: Final Fantasy XV released in July.

In June 2018, Paul joined the cast of the Apple TV+ crime drama series Truth Be Told.

In September 2018, Paul joined the cast of the HBO science fiction western series Westworld for the third season, playing the role of Caleb Nichols.

Paul will star in the upcoming sci-fi thriller Dual alongside Karen Gillan and Jesse Eisenberg, which was filmed entirely in Tampere, Finland.

Paul and Lauren were married on May 26, 2013. They had a 1920s themed wedding. Paul emailed everyone on the guest list “Beauty” from The Shivers and asked them to sing along during the ceremony. Their first child was born in February 2018, followed by their second born boy in April 2022. 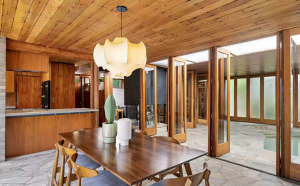 The family currently lives in Los Angeles on the south side, where they sold their previous West Hollywood home. They also have a second impressive house near McCall, Idaho that is two and a half hours away from Boise.

On the last day of filming for the Breaking Bad finale, Paul and Bryan Cranston both got tattoos for the show, but Cranston got the logo, “no half measures” tattooed on his finger, while Paul had it inscribed on his biceps. In 2019, Paul and Bryan released their own line of mezcal called Dos Hombres.

In 2013, Paul helped organize a contest to raise $1.8 million for his wife’s non-profit anti-bullying organization, the Kind Campaign. The winners of the contest won a trip to the Hollywood Forever Cemetery screening of the final episode of Breaking Bad.

That’s it for this blog TTP Member, remember to subscribe to our channel and if you feel like we’ve delivered value please share this blog with ONE person. That’s right just one person as a token of your appreciation for the hard work we put into making content that educates and helps you on your mission of building your own fortune.  Remember you can read blog after blog, but it isn’t until you actually take action that you’ll start to see results. See you soon!